I’m Cheri’s son, and am quite literally addicted to cars. I’ve owned six cars since I was sixteen, and am now almost tenty-two. Most, actually none, of my cars have ever been showroom worthy. But I’ve always managed to trade up for something “better”. Currently I own a 1997 Jeep Grand Cherokee Limited. The word “limited” is fancy automotive talk for many more problems and a horrific color scheme, black and gold.

Now, I truly do love my Jeep and it is definitely a labor of love to keep it going. As of right now, it runs great even with 198,000 miles on the clock! But I’ve also already changed the starter, all four brakes, tires, transfer case, heater core, grill, spark plugs, spark plug wires, cap and rotor, and an occasional brake light or two.

Being a product of this family, and my mother, who never ceases to amaze me with her ability to turn anything into art and seemingly spends as little money as possible, I decided to take a look at altering the look of my Jeep for, in my opinion, the better. Being a youngster and wanting a flashy and unique car to drive, I decided I would have a go at altering the color scheme on the wheels. At the moment they’re this horrendous silver color with gold accents on the spokes. Quite flashy indeed, but definitely not my style. 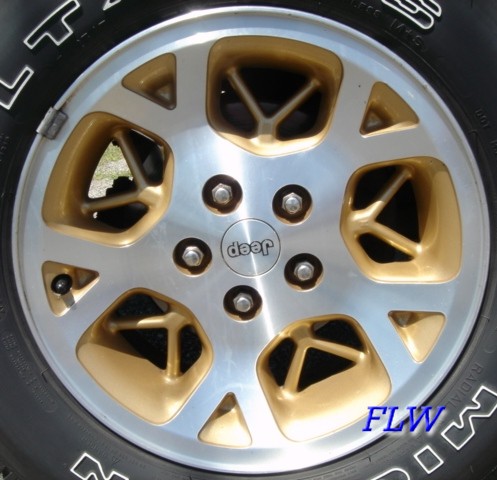 (Picture taken from the internet)

At my place of employment, we just started selling a nifty little product called Plasti-Dip in its aeresol form. Originally the plastic based paint was meant to be used for tools that had lost their rubber coating on the handles. Just recently it became an aerosol spray, which has given it endless applications. Without the budget or want to spend the money on new wheels, and being an apathetic young adult, I decided to try it out. The least amount of work, the better! After some research and time spent on online forums, I came to the conclusion that I could obtain the results that I wanted.

A couple of weekends ago, with nothing to do, I decided to set my plan in action and purchase some of this plasti-dip for the low low price of $5.97 a can. Before actually attempting to paint my rims currently on my Jeep, I decided it would be good to test on my spare tire.

With the spare tire out of my Jeep and laying flat on a piece of corrugated plastic, I cleaned it with some general use cleaning wipes. Since the tire was a spare, it had never seen any life under the Jeep and was practically spotless. I had purchased some masking tape at a local dollar store and attempted to tape paper towels around the rim to keep paint off of the tire. Since this tape was purchased at a dollar store, It clearly did not work. With that “least amount of work” ethic, present, I decided to hell with the tape and laid down my first light coat of the Plasti-Dip. I kept the spray can about twelve inches from the rim. My rims are quite detailed and I had to approach the rim at different angles to get every nook and cranny. After four coats, I deemed the rim worthy and let it dry over night. In the morning, I viewed the rim in the light and was surprised with the outcome, and how good it looked. The paint dries evenly, so overspray isn’t a huge problem.

The very next weekend, I set out to complete the set and finish all of the rims. Using my grandmothers garage in exchange for manual labor, finishing up the rims took about three hours total. 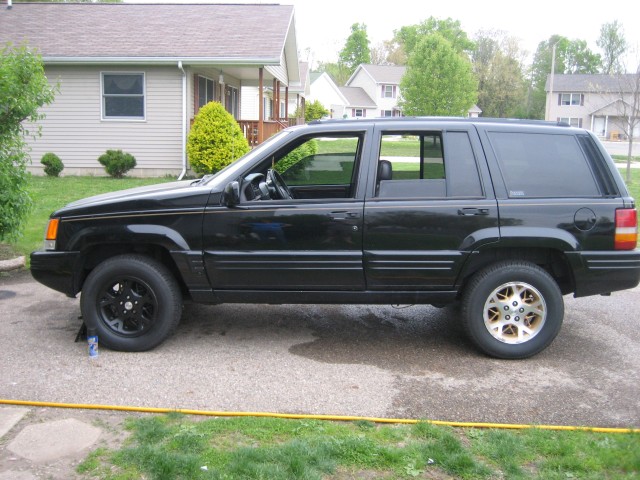 I believe the weekend project was a huge success, and am astonished at the outcome of the wheels. They look 100% better than they used to, and I’ve received quite a few compliments from Jeep admirers. Thanks for reading!

Next up, re-covering my headliner.